The Man Who Bridged the Mist 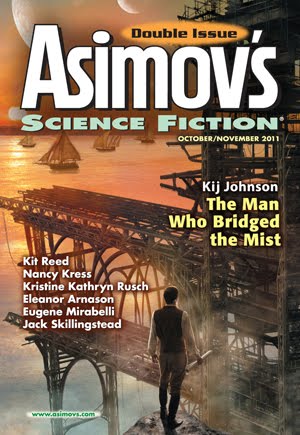 Construction story turned love story. Kit is the architect sent by the empire to build the first bridge across a corrosive river of some sort of mist dense enough to sail a boat across. Rasali operates the ferry which Kit's bridge will put out of business, if she doesn't die an early death to one of the giant "fish" living in the river first.

More than just romance against an intriguing fantasyish SF background with 19th century-level technology, Johnson makes a mega-construction project interesting without any of the predictable disasters, terrorist plots, or over-the-top human drama. She makes a better story by focusing on just the normal difficulties of large-scale construction, and a quiet character-study of the architect himself.

The story is aptly titled, it's all about Kit, but the rest of the novella: the world around him, the townsfolk, the details of construction, the mystery of the mist and the Big Ones living in it all provide a fun background for a character-study of a mildly-unhappy man who builds big things.

4 Medium-Large Ones out of 5.
Reviewed by Umbrageofsnow at 9:00 AM